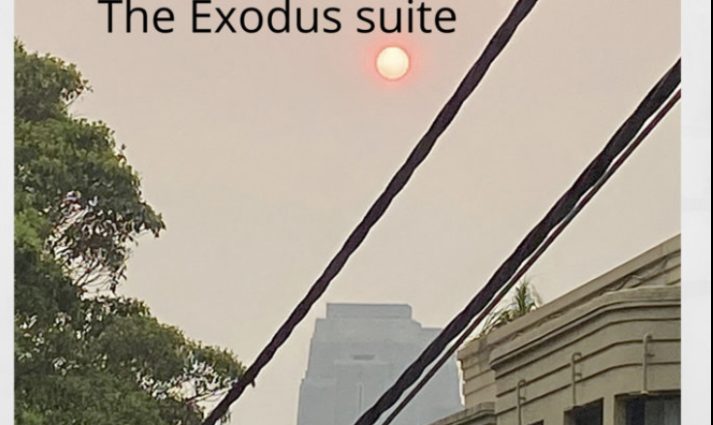 An intense rock music infusion that culminates in Visual Music hailing West of Down Under it’s DateMonthYear! Not just a band it’s a way of making music in the world. DateMonthYear began, and remains, in Hamilton, New Zealand, tend to make music that combines pop melodies, rock dynamics and movie atmospheres.

The Exodus Suite is a five-part ‘Special Interest ‘ project that was done with the intent to expand the DateMonthYear sound as far out as it was possible to go in the directions of the instrumental, musique concrete, Movie soundtracks, and generally experimental areas. There was always going to be the intent of making difficult music.

The start point was leftover ‘found audio’ from the intro of our song ‘Exodus’, and the dominant musical elements explored were timbre, structure, and rhythm. Melody, and vocals. in particular, went to the very back of the queue.

There are five pieces in total, all of which are challenging and -hopefully!- disturbing listening. Four of the pieces were given to local filmmakers with a brief to interpret as they will. This resulted in an equally challenging series of viewing experiences, which are compiled into the Exodus Suite Playlist on YouTube.  Creatively, this kind of ‘no limits’ approach has been extremely rewarding- and the whole thing is a proud addition to the DateMonthYear canon.
The project concludes with the release of all five pieces of the suite available only on Bandcamp