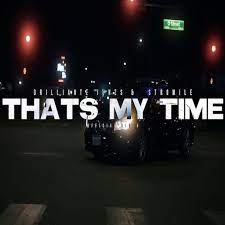 Unforgettable that’s what it is…  Stromile … rapper.. Producer… music  biz mogul  Hailing from California, Stromile first became involved in music as part of the SIQ Squad collective, where he was nicknamed “Stromile”.  After signing a digital distribution deal with LRT/INgrooves/UMG, Stromile launched his own label Unforgettable Entertainment.

Stromile has amassed a huge catalogue of mixtapes and album projects between 2012 and 2020 since then, he teamed up with his longtime label-mate Brilliante Jones for his latest release, ‘Thats My Time’, which is currently available on platforms for downloading and streaming.

The latest from this multi talented producer is  That’s My Time, teaming up with Brillante Jones  imagine the typical West Coast rap artist, think again. Brilliante Jones is Energetic, Dedicated, and Passionate. His music is intended to captivate an audience. When asked why he sets himself apart from other artist, Brilliante says “I intend to bring the form of good writing back to Hip Hop.” Brilliante Jones’s belief is that crafting quality music is an artform, and creating it begins with structure as well as experience. He has been illustrating pictures through sound  since day one and isn’t planning on stopping anytime soon. His latest release is titled “That’s My Time” alongside long time friend and label mate Stromile. This new single is available on all major streaming platforms for the fans to watch, listen and enjoy.

The inspiration for the song comes from the artist’s dedication to staying true to the craft and having fun doing it.  The song is about how they spend their time and the music that comes from it.

Where to stream and watch