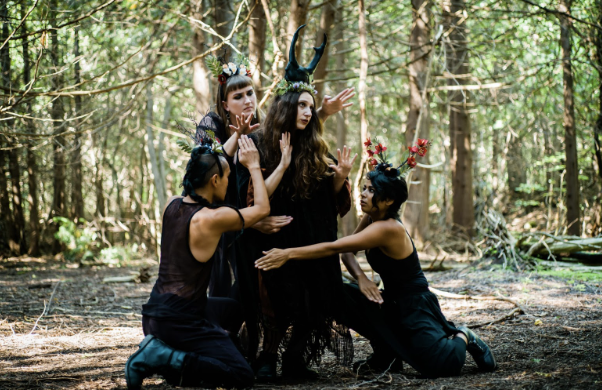 Kalila Badali is an alt-folk/art-pop singer-songwriter and psychotherapist based in Toronto. Aside from her solo project, Kalila is a lead vocalist and songwriter of the indie band, Shy By Shy. Music represents an ongoing avenue for Kalila to express her understanding of the world as a neurodivergent person.

Kalila wrote “Dotty Mae” after spending a whole summer working seven days a week as a new psychotherapist and an inclusion specialist at a summer camp in Toronto. To conclude this busy summer she celebrated with a little too much weed and her beloved co-workers at a cottage near Presqu’ile beach in Prince Edward County. It was there that she met Dotty Mae and had her tarot read for the first time sitting cross-legged at the edge of a forest.

Kalila first pitched Dotty Mae to her band Shy By Shy and played the song repeatedly in the early days of this project. Eventually, she opted to bring this song in a folkier, witchier direction and decided to begin recording it with her long-time friend and producer James Atin-Godden. Together they used auxiliary percussion to emphasize/allow for more dynamic space for Kalila’s unique acoustic guitar style of fingerpicking.

Planning for the music video took place over the better part of 2022 and was eventually filmed at Wasaga Beach. To capture the right feel, Kalila wanted to feature dance at the center of the video. She had no previous experience with dance, so she worked with choreographer Bryony McCaughey for many months before the shoot and articulated a frame for the type of dance – “structured improv” and moving tableaus.

The music video narrative plays with similar themes to the song “Dotty Mae” – more specifically about inflated traumatic responses to relationships. It’s about protection, chronic doubt, hiding in plain sight, and reaching for solace in anything and everything that could offer an answer, education, therapists, drugs, and even tarot readers like Dotty Mae.